To understand the mechanism that causes ectopic Xist expression in SCNT embryos, we analyzed embryos cloned from different donor cells throughout the life cycle. As a result, only the genome from fully-grown oocytes could repress the expression of Xist, suggesting establishment of repressing marks at the last stage of oogenesis. (Oikawa et al., Epigenetics 9: 204–211, 2014. http://www.ncbi.nlm.nih.gov/pubmed/24172050) 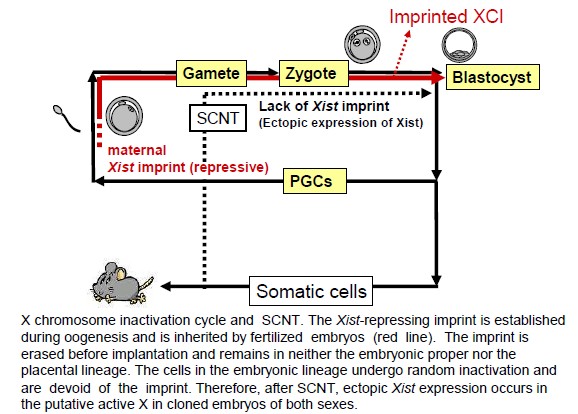 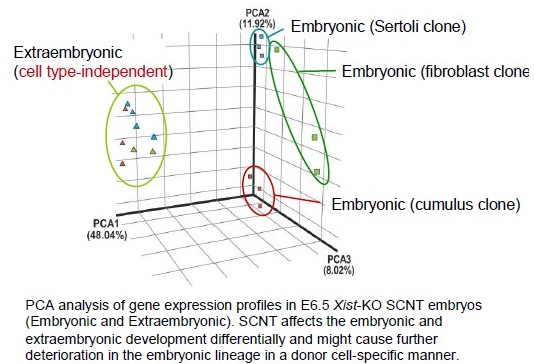 We examined whether peripheral blood cells freshly collected from living mice could be used for SCNT. We collected a drop of peripheral blood (15-45 μl) from the tail of a donor. We cloned putative granulocytes/monocytes and lymphocytes separately and obtained 2.1% and 1.7% birth rates, respectively (P > 0.05). We further applied granulocyte/monocyte cloning to two genetically modified strains and two recombinant inbred strains. Normal-looking offspring were obtained from all four strains tested. This strategy will be applied to the rescue of infertile founder animals or a "last-of-line" animal possessing invaluable genetic resources without sacrificing donor animals. (Kamimura et al., Biol Reprod 89: 24, 1-6, 2013. http://www.ncbi.nlm.nih.gov/pubmed/23803554) 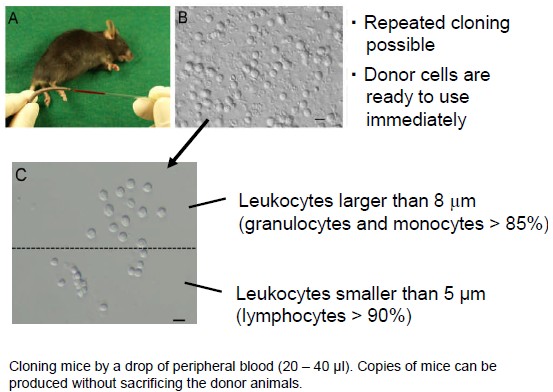 Although offspring can be obtained by round spermatid injection (ROSI) in mice, its efficiency is lower than that of intracytoplasmic sperm injection (ICSI). To see whether any epigenetic abnormalities were involved in this inefficient development, we examined the 5-methylcytosine (5mC) and 5-hydroxymethylcytosine (5hmC) levels of the male pronucleus of ROSI embryos. Some embryos showed a normal pattern of decreased 5mC and increased 5hmC, in consistent with the idea of active DNA demethylation by oxidization of 5mC to 5hmC. However, the remaining embryos showed equivalent levels of 5mC and 5hmC in their male pronucleus. Whether the latter pattern leads to ROSI-specific developmental deficiency would be a future subject. 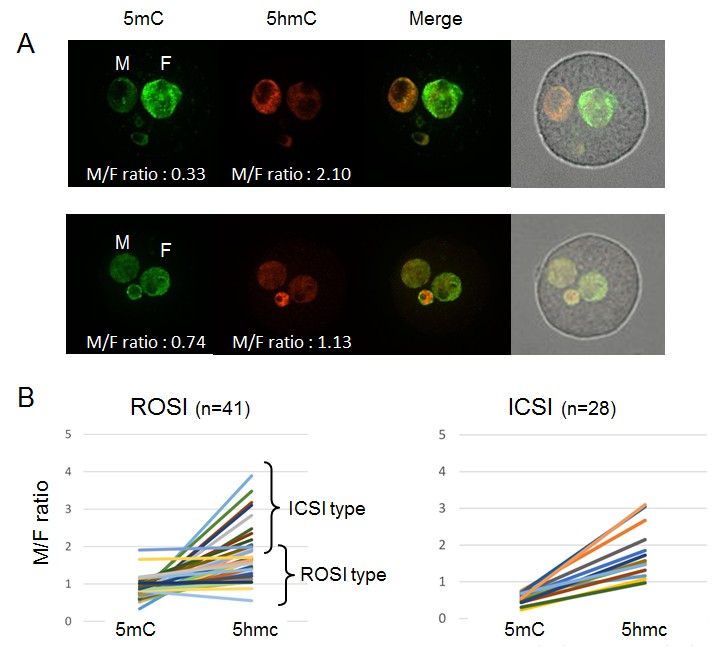 We developed a new IVF protocol using microdroplets. Only 5-50 sperm were introduced with glass capillary into an 1μl droplet of 1.5 mM reduced glutathione-HTF containing 3-5 oocytes. Fertilization rates reached 60% even using frozen B6J sperm. This method may be particularly advantageous when only a limited number of motile sperm are available. 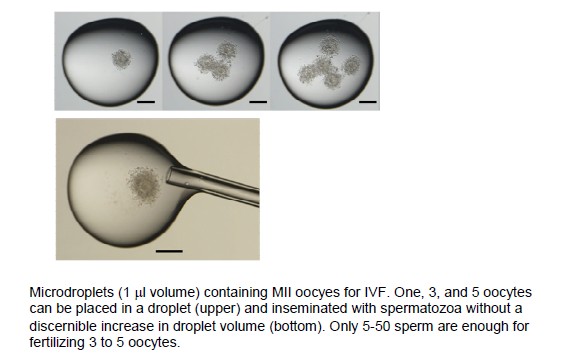 We succeeded in obtaining offspring from vitrified embryos in 38, 1, and 2 wild-derived strains belonging to Mus musculus, M spretus, and M spicilegus, respectively. This could be achieved by optimizations of assisted reproductive techniques including super ovulation, IVF, cryopreservation of embryos and sperm, and embryo transfer to each wild-derived mouse strains.(Hasegawa et al., J Reprod Dev 60: 187-193, 2014. http://www.ncbi.nlm.nih.gov/pubmed/24583808)

Trophoblast stem (TS) cells are derived from trophectoderm of blastocyst. Although it is generally accepted that they form flattened colonies, our detailed morphological observations revealed the coexistence of five types of colonies. Cdx2, a stem cell marker of extraembryonic tissues, was differentially expressed in different types of colonies and, unexpectedly, those with irregular shapes also showed a high Cdx2 expression. We will perform time-lapse observations for the transformation of each type of colonies.

We examined whether the limited capacity of rabbit iPS cells to differentiate into neural lineage cells could be mitigated by converting them into the so-called “naive” state. After the iPS cells had been converted to a naive-like state, they readily differentiated into mature oligodendrocytes developing characteristic ramified branches, which could not be attained even with ES cells. These results suggest that the naive-like conversion of iPS cells might endow them with a higher differentiation capacity. (Honda et al., J Biol Chem 288: 26157-26166, 2013. http://www.ncbi.nlm.nih.gov/pubmed/23880763)